Santorini is the European Paradise

...red sand beaches draw tourists from around the world

In a poll this November Santorini, a small island 120 miles off the Greek mainland, was voted one of the best islands in the world. Santorini or Thera (or even Thira) as it is officially known, is steeped in history, folklore and outstanding natural beauty. Popular with young island hoppers, couples getting married and retireeâs Santorini is an idyllic island for all. Here at My Guide we couldnât agree more, so here are our reasons why Santorini is a paradise in Europe.

The natural and man-made beauty of Santorini comes from the unique circumstances in which the island, as we know it, was made. During the second millennium BC (around 3000 years ago) a huge volcanic eruption, one of the largest in recorded history, dramatically altered the shape of the island. In the thousands of years since, tsunamis, eruptions and earthquakes have meant that Santoriniâs coastline and buildings are unrivalled anywhere in the world.

In 1956 a major earthquake and volcanic eruption meant that most of the villages were destroyed leading to the building of the iconic dome and cubical shaped houses on the island today. They are painted vivid colours of white, red, blue and yellow to reflect the scorching sun (Santorini is one of only two places in Europe with a desert climate). The way that the houses are built into steep cliffs created by the earthquakes, make it look like they are tumbling into the sea. From the balconies however, looking out to sea, is where couples choose to marry. As the buildings curve around the cliff tops (this area is locally called the âeyebrowâ) looking like they have been thrown on top of each other, a huge orange orb slips slowly down behind the ocean, the last rays of the day reflecting of the bright coloured houses. Santorini is undoubtedly one of the best places in the world on earth to watch our sun set.

The view can also be enjoyed on top of the Skaros rock, a cliff where the Agios Georgios church once stood (and its ruins can still be explored) and where the stunning views out onto the ocean make it feel like you are on the edge of the world. 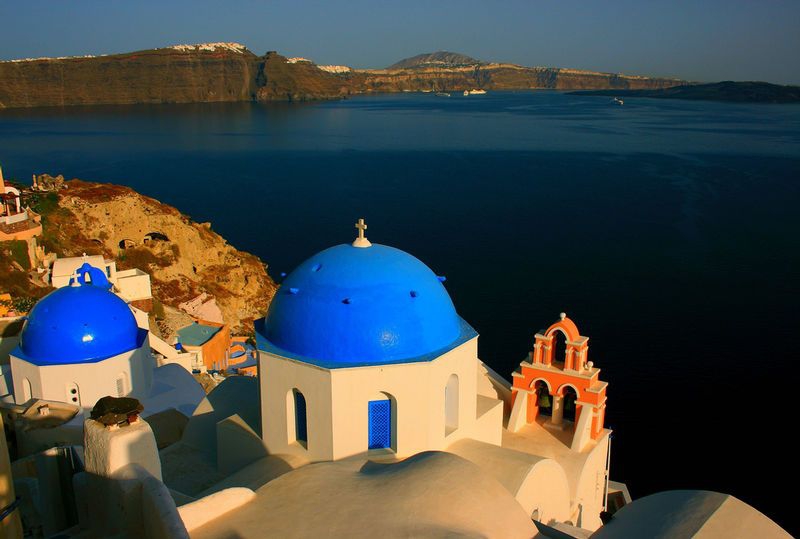 The beaches of Santorini are unique to say the least. There is not much in the way of the white sand that people have come to expect nowadays from a Grecian holiday. The beaches are made up of volcanic sand, meaning that theyâre pebbled red, black and yellow. Some people find the idea of relaxing on black sand hard but as soon as you see the deep blue clear oceans and the feel the hot sand between your toes, the ideals of a ânormalâ beach soon slip your mind. The cliff faces that surround the beaches are also magnificent. Centuries of salt winds and earthquakes have manipulated the cliff faces to look like something out of Doctor Who. In Vlichada beach the black and blonde rock looks like the surface of the moon and tombs have been found in the limestone. Other unusual rock formations have been found on other cliffs around the island as well as caves to explore.

Santorini has many iconic beaches and the most famous has to be the Kokkini Paralia or the Red Beach. Red cliffs like Mars and red sand beaches draw tourists from around the world. In Oia the waters are shallow, so itâs perfect for families and there are restaurants and pubs around this area too. Kamari beach also offers good nightlife underneath the mountain and to get to Ammoundi Port you can either drive or take the illustrious 235 steps down the cliff into the harbour. 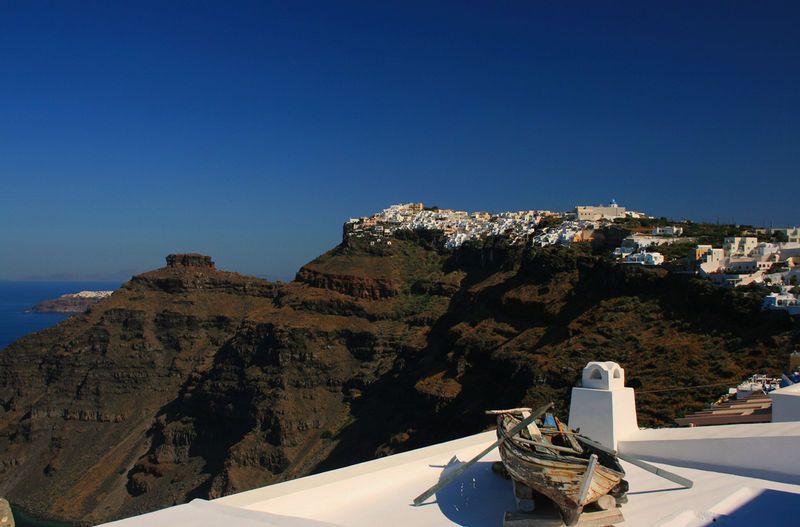 Santorini is also a perfect destination if you want to take in some culture while on your holiday. Before the epic earthquake it was home to the Minoas civilastion. The Minoas people thrived on the island exporting textiles and were so advanced that they had hot and cold running water (the hot came from the natural springs made by the volcano), a complex draining system and even toilets. Fine artworks excavated in the late 60âs show that the Minoas where sophisticated and wealthy, and it is even theorised that the advanced cultures destruction from the eruption and subsequent tsunami were the basis for Platoâs legendary island of Atlantis.

Because of this, there are plenty of museums to visit and ruins to investigate. There are 13 museums on the island including the museum of Prehistoric Thera, which takes visitors step by step through the cultural development of Santorini. Exhibitions include the âGolden Goatâ, which was found hidden in the ruins of Minoas Thera. Excavations have proved that the city was evacuated before the eruption hit, so the âGolden Goatâ has baffled archaeologists as to why the goat was made and also why it was protected so well from the oncoming lava. The ruins of the ancient city of Thera are also well visited by those in Santorini. Understandably they have not stood the test of time well, but outlines of a gym and temples can be seen, as well as mosaic floors.

The rich volcanic earth that covers Santorini grows some very unusual produce that is entirely unique to the island. The cheery tomatoes that grow on the island are renowned for being some of the best in the world. They are very small, hold their deep colour for longer and taste delicious. White aubergines also grow on the island, which have no seeds and are so sweet they can be eaten raw. Odd cucumbers (katsoÃºmi) also grow on the island. If unpicked they turn from green to yellow and taste almost like melon.

Santorini also has a very prominent wine industry. Again, the volcanic soil creates fertile conditions for growth, with vines growing down the sides of the cliffs, sucking moisture in from the winds of the sea and the morning dew. This unique growing creates wine with a similar unique taste, the most famous of which, asyrtiko, has a high sugar, and therefore alcohol, level, perfect for the end of a hot day.

Although not as famous as the neighbouring island of Ibiza, Santorini is popular with young island hoppers and the inhabitants of the island have made sure that their nightlife is catered for. The town square of Fira, is where all the clubs are located, but there are as a lot of bars dotted around the island as well. The town square includes a jazz club and âArt CafÃ©â, which plays live music. Choosing which club to go to depends on what night you are planning on having. âKoo Clubâ is the biggest, whereas âEnigmasueleâ is the busiest and âTithoraâ is where the young tourists all go. Although eating out and other activities are pretty cheap on the island as a whole, the clubs and bars in Santorini are very expensive, however this is a small price to pay for a night out that wonât be forgotten.

So there you have it, the My Guides list of why Santorini is one of the greatest islands in the world. Now, whereâs my passportâ¦