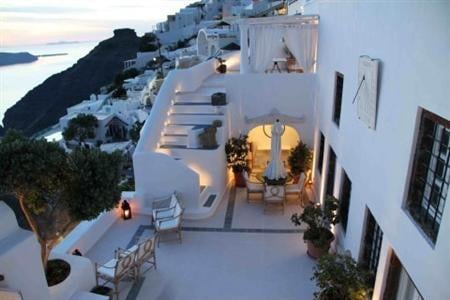 On Santorini, legend is almost indistinguishable from reality. And there, on the island reputed to have been the land of Atlantis, the five houses of the Tsitouras Collection are perched on a thousand-foot cliff overlooking one of the most spectacular views in the Mediterranean.

The mansion that forms the nucleus of the Tsitouras Collection was built in 1780. Over the centuries, it has served as a school, post office, and private home. It was renovated in 1985 by the famous collector Dimitris Tsitouras, and is now a small luxury boutique hotel.

Dimitris Tsitouras is a lifelong art lover and historian, as well as the author of many books about the island, known as the Greek Pompeii. In 40 years, Dimitris Tsitouras has amassed over 4. 000 Santorinian artefacts, all destined for a museum he is now building. In 2007, ITN Factual, on behalf of Discovery Channel, included him in the Worlds Most Successful Series, dedicating a whole episode on his life, from childhood up to now, covering all his activities, as well as this 5-star hotel in the island of Santorini.

In collaboration with British designer David Hicks, who advised him on colour schemes, Dimitris Tsitouras went about decorating each house around a different Facet of Greek history, infusing each one with a particular personality, and thus creating a design hotel with museum-quality art work, dating back to the 19th century.