If you are a business in Greek Islands and have an event to promote you can do it on My Guide at no cost. 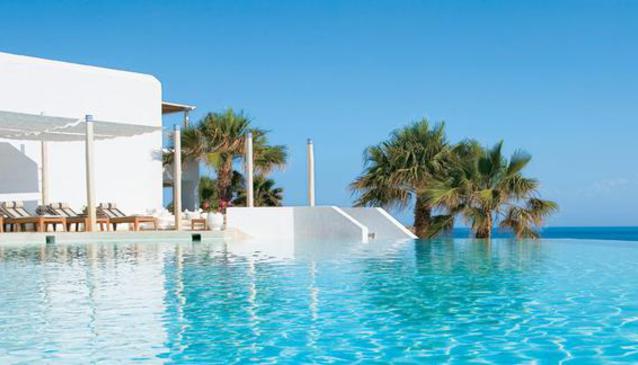 Are you a business owner in Greek Islands?

Promote your business 365 days a year with the #1 Guide to Greek Islands.

The Mykonos Blu Grecotel Exclusive Resort is a Mykonos hotel inspired by Cycladic tradition. It is located near the popular nightclub districts of Mykonos.

The Mykonos Blu Grecotel Exclusive Resort has been constructed in traditional Aegean style.

Guests can look forward to marble columns with blue veins as well as walls that are covered in azure wash. Guestrooms are built as island style cottages.

The Mykonos Blu Grecotel Exclusive Resort is located at Psarou, Mykonos in Greece. The property can be found about eight kilometers from Delos Island and four kilometers from the center of Mykonos.

Discover the traditional Chios, the flavor of bread baked into wooden oven and try many different cheese varieties................

One day cookery courses to suit all abilities, come & try for yourself, you may be surprised just how good you are! Learn how to make delicious easy to re-create Greek di...

Experience the Cretan gastronomy, and learn how to create healthy dishes. A fun and interactive cooking class for any level of experience............

Best Things To Do in Greek Islands

Best Things To Do in Greek Islands

At Caldera Yachting they have extensive experience in personalised or private cruises, ensuring that all customers will enjoy the comfort, and enjoyment of their services...

Super Paradise; a place for all those seeking for fun by the beach and become part of an eclectic crowd on Mykonos island. A mix of personalities and ages enjoying the vi...

Gavalas winery is a family tradition in Megalochori of Santorini. They have been engaged in the vinification of the varieties grown on the famous island since the end of ...

Join The Greek Wine Experience at Kefallonia, on a truly unforgettable experience and discover the diversity and the secrets of the indigenous Greek wines...................

Gaia Wines was founded in 1994 & owns a modern winery in the promising P.D.O. area of Santorini. Their aim is to present the famous Greek grape varieties in the wine enth...

At Caldera Yachting they have extensive experience in personalised or private cruises, ensuring that all customers will enjoy the comfort, and enjoyment of their services...

Yachting Greece Ltd is a company specialized in yacht charters and sailing holidays in Greece. They have access to a fleet of more than 1000 professional yachts of all ca...

Mykonos Yachting is a marine tourism office with the knowledge to create a unique and unparalleled holiday experience for you......................

Vyra.com is a yacht-chartering agency that simplifies the booking process of yachts so that anyone can experience a beautiful and easy sailing holiday..................

In such an idyllic location, imagine yourselves exchanging vows, or celebrate the beginning of your new life together, with the sun setting behind the famous volcano and ...

Your destination wedding will be full of magic, romance, with breathtaking views, romantic sunsets, and white washed chapels, in most of the famous and amazing Greek...

Unlike so many other coordinators, at Paxos Weddings, they know that such a unique day for you, has to be tailored to your wishes. They are willing to offer you a total '...

Oceanids Estate is perhaps the perfect backdrop for a memorable wedding event in Santorini...................

Create & Share Your Own 'Mini Guide to Greek Islands'

Part of the My Guide Network