7 Places to Point Your Camera in Kefalonia

...this trip wasn't going to throw up the same suspicions of an elasticated beard.

Even before stepping foot in Greece I imagined the Ionian Islands to be deliciously rustic, with skies so blue and seas so clear, that as a child, you’d have to be prised away kicking and screaming. Then Captain Corelli’s Mandolin came out and the damage was done. My image of Kefalonia was forever one of lazy summer days, pink anemones, glistening waters and charming tumble-down houses.

However, arriving on the island I couldn’t help but think it was going to all come crashing down, like the time that loud kid in the playground tells you Santa is your dad (if you’re reading kids, don’t stand for it). A sort of trepidation that the myth might, just might, not live up to the reality.

Needless to say, one look out the window as the plane came skirting around the coast was enough proof this trip wasn’t going to throw up the same suspicions of an elasticated beard.

Kefalonia, at least to me, is perfect. An island that oozes Mediterranean charm, laid back living and gorgeous untouched scenery. So, if you’re planning a trip and wondering where, out of all the picturesque places on the island you should point your camera, here are just a few spots not to be missed… 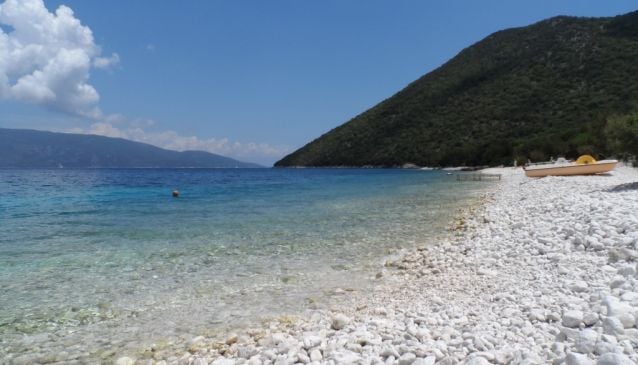 As a primary location for the filming of the 2001 film version of Captain Corelli’s Mandolin you might expect Antisamos Beach to be busy and commercialised. Instead it’s quiet and beautifully untouched, save a couple of laid back snack bars nestled away from the smooth, white pebbles.

The sea is a colour chart of turquoise, turning clear as you approach the shoreline, allowing you to see the bottom as your feet dance along the pebbles. An elegant entrance to the sea is your only compromise on a beach that looks as beautiful from the ground as it does from the cliff-side road that leads you there.

Did you know? Antisamos Beach has no shade so those wanting to spend the day here, or those with young children, will need to bring a parasol – and plenty of sun cream. 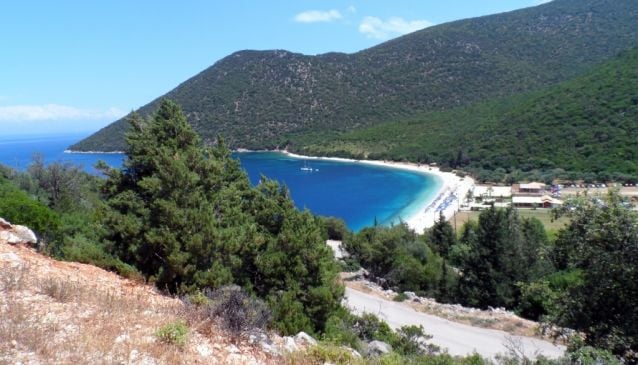 If you make it to but one coastal village on your stay make sure it’s Fiskardo. Located right at the northern tip of the island it isn’t easily stumbled upon, but the rewards for those that make the drive are great. The seafront is lined with chic restaurants whose terraces overlook the water, where you can sip a cool drink in the shade as the little fish dart around below you and the yachts bob in the breeze. The pace here is slow and the narrow pathways, colourful houses and sail boats make for a perfect setting should you want to while away the hours before dinner.

Did you know? Fiskardo is a popular spot for the rich and famous. Many well-known personalities have fallen in love with the village and bought luxury villas in the surrounding hills while making use of the harbour to moor their expensive yachts. 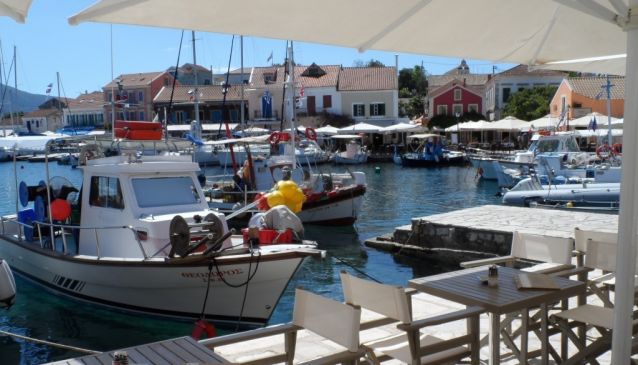 If you’ve seen any photos of Kefalonia chances are you’ve seen an image of Myrtos Beach. It’s the most photographed shoreline on the island, and for good reason. Driving south from Fiskado you’ll see it spring into sight as you navigate the winding coastal path past Asos. Jump out at the viewing spot to get that ‘iconic’ shot, or to simply take in the view before following the road to Agkonas. Turn right towards the turquoise sea, and enjoy meandering down the hillside as the full spectacle of this idyllic beach unfolds.

The white cliffs and striking turquoise waters are even better close up. Get there early and the beach could be all yours…

Did you know? The sunsets here are amazing. Watch the sky turn pink as the sun sinks into the turquoise waters then drive over to Agia Effimia for a bite to eat. 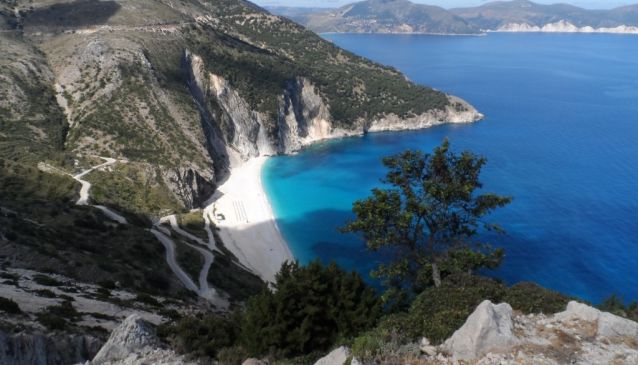 Despite its popularity, the Melissani Cave is well worth the detour if you’re spending any time at all in Sami, (incidentally where Penelope Cruz is said to have dined every evening during the filming of Captain Corelli’s Mandolin), located as it is, just 2km away. The cave is now open to the elements, after the roof collapsed exposing the lake below. Today the rays of sunlight filter through to give the water its turquoise allure and sparkle. The best time to visit the cave is when the sun is highest in the sky (sun hats at the ready of course), when you’ll also see the cave walls dance in the water’s teasing shimmer.

To explore the cave you are taken out by boat on a tour that lasts around 20 minutes.  The guides explain a variety of interesting facts as you glide along, providing an education as well as a great spot to work out that camera…

Did you know? Melissani Lake is 3.5 km long and 36 meters high and is in fact a mixture of both salt and fresh water. The cave was re-discovered in 1951 by Giannis Petrochilos. 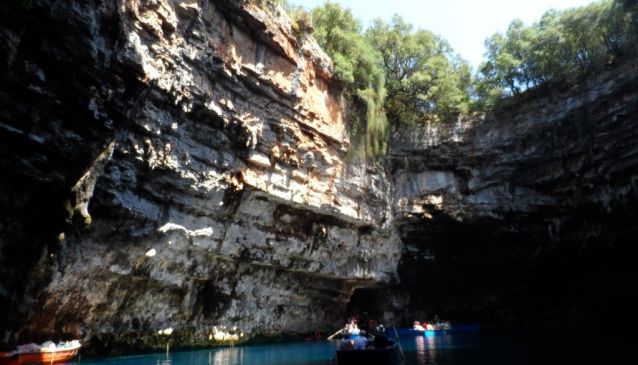 Another sight that is in easy reach of the town of Sami is the Drogarati Cave. Discovered some 300 years ago (and believed to be around 150 million years old) it is one of Greece’s most impressive caves, with stalactites and stalagmite’s invading this cavern some 60 meters below the surface.

The cave has been lit so visitors can get the full effect of these impressive formations as they walk around the paths. The rock glows a soft yellow but if you look closely you’ll see shades of red and white. The former is from the iron in the rock and the latter is due to the chalk and limestone mixed into the caves walls.

At a cool 18 degrees Celsius not only is the cave remarkable in its geology it’s also a pleasant escape from the scorching Greek sunshine.

Did you know? Drogarati Cave is a popular venue for concerts due to the amazing acoustics. The cave can seat up to 500 people on a specially constructed stand. 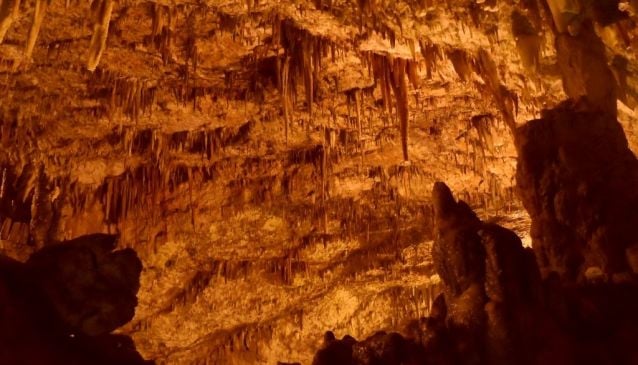 As the highest point of the Ionian Islands, there is no better place than Mount Ainos to come and take in some amazing views. As well as getting a bird’s eye view of Kefalonia, on a clear day it’s possible to see right out to her neighbouring islands in the Mediterranean Sea.

You can climb all the way to the top (said to be akin to scaling Ben Nevis in Scotland). However, a more relaxing option is to take the car up to the transmitter station, park up and walk through the national park to the summit (incidentally, cars aren’t allowed in the national park so if you want to make it right to the top this has to be done on foot).

The national park is certainly worth a visit in itself, and the trees and tracks are the perfect rugged backdrop to the views which reveal themselves through the pines. Keep your eyes peeled for the birds, insects, goats and even tortoises that call this national park their home.

The climb to the summit itself is a little more strenuous, but worth it when you stand on the top and survey the scene below.

Did you know? Wild white horses can be found in the national park on Mount Ainos. Keep your eyes open for these shy but beautiful creatures. 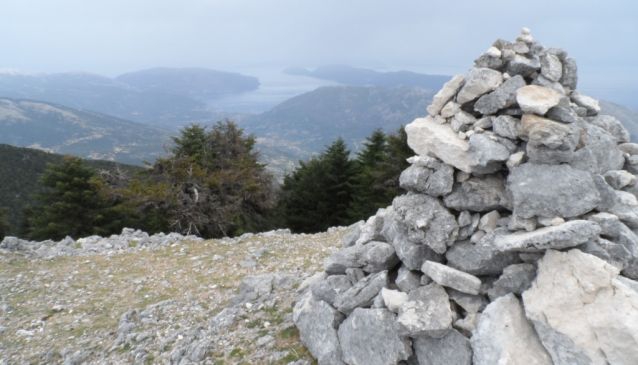 Poros is a small coastal town that is located on the south east of the island which is divided into three parts. There’s a distinct port, a shingle beach with adjoining town and Aragia Beach – cut off from the centre by the River Vohinas.

The town is a good place to come and while away the hours, be it on the beach, soaking up the sunshine at the port or grabbing a bite in one of the many tavernas. For a venue with a difference park at the port and walk towards the big rocks which divide it form the shingle beach. Set into the rock is a bar that’s been turned into a ship. A novel place to sit and watch the boats come and go (they also do a mean waffle…)

Did you know? To get the best views of Poros head out to the Poros Gorge and up to the Atros Monastery. Not only is this the oldest monastery on the island it also has some amazing vistas of the town below. 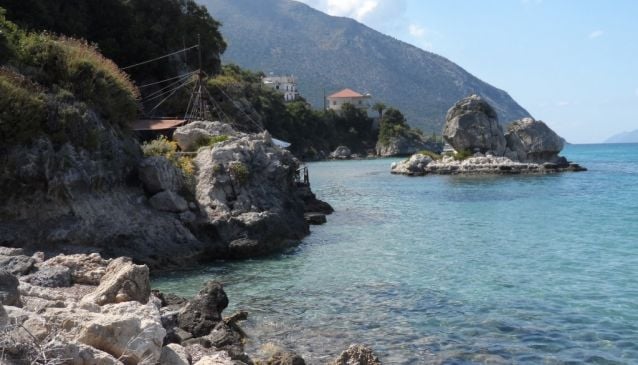 Ok, so it's not in Kefalonia but part of island living is definitely about getting up close and personal with the sea.

For those that want to get out and explore the waters around the island there are multiple boat trips available which take you along her coastline and over to the surrounding islands. For those interested in a trip to Zakynthos there are boats that leave from Skala two or three times a week during high season. As well as seeing Kefalonia’s sparkling coast you get to take in the turquoise waters of Zante’s Blue Caves and iconic Shipwreck Cove. Tourist honeypots? Yes, but must-visit sights for some memorable holiday photographs all the same. Best time to visit? Early morning, before the crowds.

Did you know? Shipwreck Cove (or Navagio Beach) is only accessible by boat. The vessel that lies stranded on its beach was left shipwrecked (along with its contraband) in 1980 after hitting rocks as it fled the Greek Navy.

Artcle and photos by Kirsty Brown 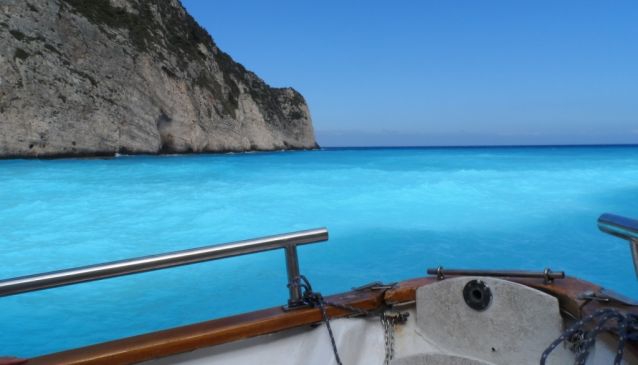